The 11th annual conference of the Society for the Study of Childhood in the Past was held from the 22nd – 24th September 2018 at the Museum of Natural History in Vienna, Austria. This awe-inspiring museum is world renowned for its collections and is home to the Venus of Willendorf. The theme of this year’s conference was “Pregnancy, birth, early infancy and childhood: life’s greatest transitions in the past”. Researchers presenting at the conference came from a variety of subject areas, including archaeology, anthropology, bioarchaeology and history, and the temporal periods discussed ranged from the Gravettian through to the 19th century. Furthermore, the podium and poster presentations took delegates around the world with research exploring children and childhood in Greece, Italy, Spain, Britain, Austria, Hungary, Slovakia, the Czech Republic, Switzerland, Finland, Mesopotamia, Brazil, the Philippines, and the USA. 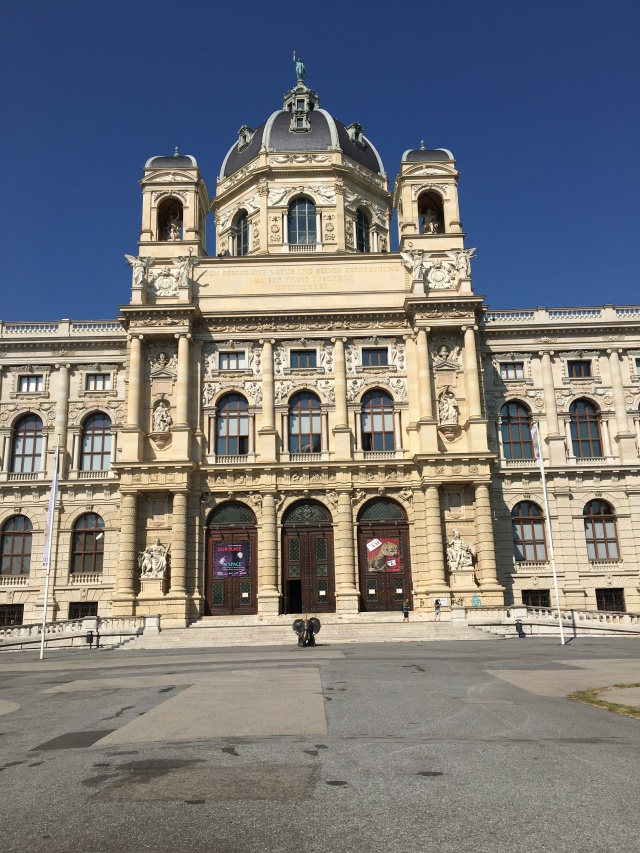 On the first day of the conference, April Nowell started proceedings with an exploration of the personhood of Gravettian infants through the use of burial data. John Whittaker and Kathryn Kamp discussed how changing projectile technologies made it easier for children to use weapons in the past. Luis Pezo Lanfranco and Sabine Eggers examined weaning strategies, subadult diets, and parental investment of individuals inhabiting shellmound Jabuticabeira II (Brazil) through the use of isotope analysis. Next, personal status and the identity of children were established through an examination of grave goods by Ekaterina Stamboliyska (who focused on children from the Durankulak necropolis in Bulgaria) and Daniela Kern (who looked at children from Corded Ware and Bell Beaker burials). Eszter Melis and colleagues explored developmental stages of childhood in Early and Middle Bronze Age Hungary. It was refreshing to see that these authors looked at both the inhumed and cremated remains from the study sites in their paper. This approach ensures that there are no gaps in the demographic profile of a site (i.e. those afforded the cremation rite are also accounted for). The final paper of the day was by Klaudia Daňová and colleagues who presented their research on the differential character of children’s burials and their spatial distribution in the area of the Únětica Culture in Bohemia, Moravia, and Slovakia. The different approaches adopted by researchers highlights the dynamic nature of studies that focus on children and childhood in the prehistoric past. Following the session, delegates enjoyed a wine reception in the Dinosaur Room in the Museum. The dinosaurs and the animatronics model of an Allosaurus created quite the talking point throughout the course of the evening. 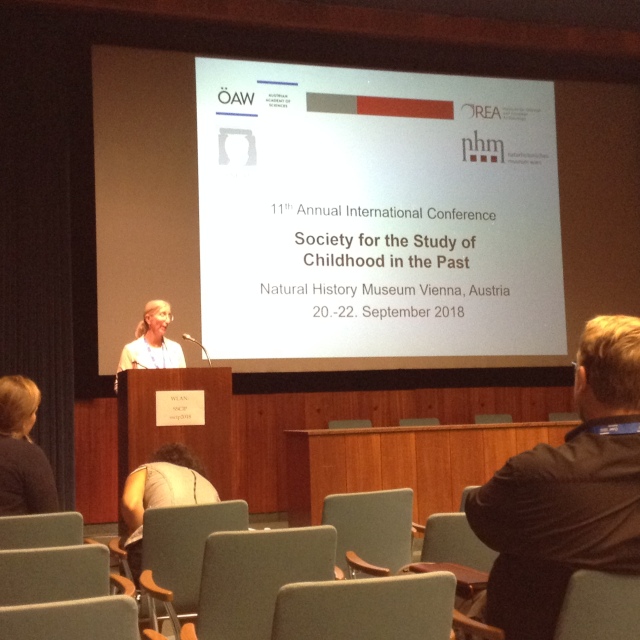 Sally Crawford, opening the 11th annual conference of the Society for the Study of Childhood in the Past (photograph by Kirsty Squires) 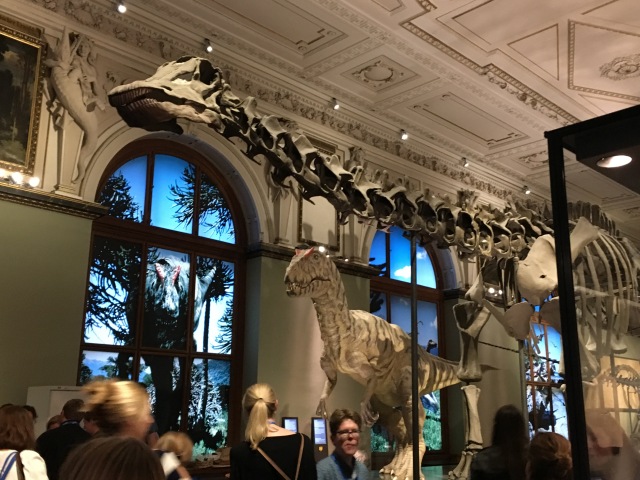 The second day of the conference started in Bronze Age Iberia with Margarita Sánchez Romero, who explored the agency of childhood through an examination of grave provisions from argaric societies. The following paper adopted a biocultural approach to understanding childhood in Late Bronze and Early Iron Age in the southern Carpathian Basin was adopted by Daria Ložnjak Dizdar and Petra Rajić Sikanjić. Next, Beata Kaczmarek used linguistic data, archaeological material, and anthropological evidence to understand childhood in Mycenae. Developmental stages of childhood in Ancient Mesopotamia were examined by Nadia Pezzulla, personhood of children in late prehistoric Italy was discussed by Elisa Perego and colleagues, and Anna Serra examined the developmental stages of children as exhibited through grave goods during the 6th – 3rd centuries B.C. in the Etruscan city of Spina. Christina Papageorgopoulou and Tasos Zisis presented their results from isotope and osteological analyses, which were employed to test the hypothesis that “the youngest members of North Aegean society were affected by colonisation”. Hanna Ammar looked at the portrayal of children at play in Classical Greek art and raised questions pertaining to the depiction of wheel carts on choes (miniature wine jugs). Infant morbidity and mortality of infants in Ancient Greek society was examined by Alexandra Syrogianni, obstetric complications and hazards in Romano-Britain were investigated by Candace McGovern, and a bioarchaeological approach to understanding Roman childhood in Switzerland was adopted and presented by Chryssi Bourbou. Zsofia Rácz and Tamás Szeniczey similarly employed a biocultural methodology to gain an insight into childhood mortality and health status of children from the 6th–8th century cemeteries of Kölked in southwest Hungary. The role of hospitals as places of refuge for pregnant women and children in medieval England was investigated by Esme Hookway who highlighted that these institutions acted as places of public charity. The final presentation of the day was delivered by Sanna Lipkin and colleagues who explored the differential burial rites afforded to children in post-medieval Finland. Mummified remains of children alongside associated preserved textiles and coffins were found in several of the churches examined and it is encouraging to see the increasing use of innovative, non-invasive methods (e.g. CT scanning) in research projects. 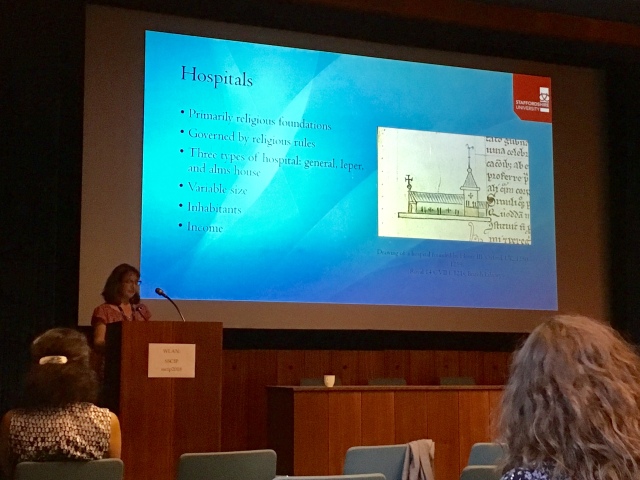 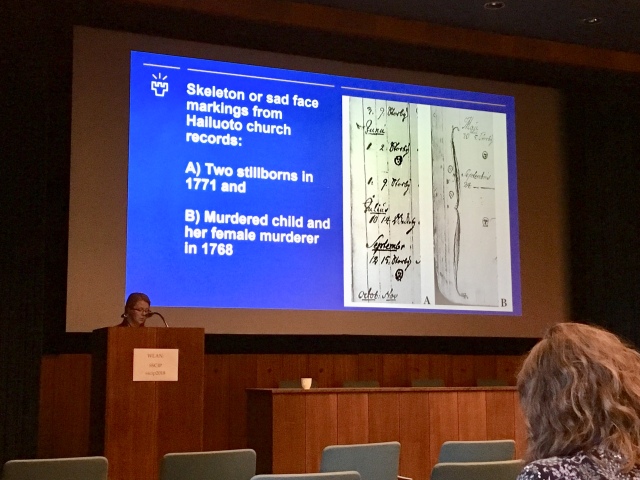 The AGM took place on Saturday evening. In the meeting, we said goodbye (and thank you!) to our outgoing president, Sally Crawford, and welcomed our new president, Katie Hemer. We also welcomed two new committee members, Esme Hookway who has taken on the role of Social Media and Publicity Secretary, and Claire Hodson who has taken over the role of Membership Secretary from Katie Hemer. 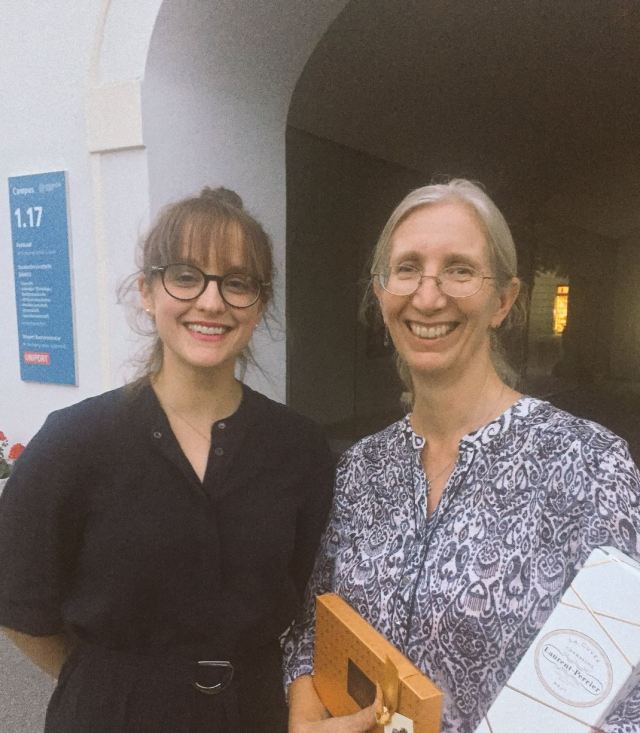 The final day of the conference focused primarily on historical contexts. Proceedings started with Historian Matthew Stanton exploring Benjamin Keach’s three catechisms which recognised the developmental stages of children and, consequently, improved the religious and cultural teachings of children in the 17th century. Kirsty Squires then investigated the value of education in 19th century Stoke-on-Trent (UK) through an examination of census data, testimonies, and written reports from the period. Jane Eva Baxter explored how young children were taught about mortality in 19th century America whilst R. J. Knight discussed how the enslavement of children, in late 18th century America, had a significant affect on their identity and relationships with their captors and parents. Jennifer Muller investigated the cemetery population, particularly the infants, at the Erie County Poorhouse in Buffalo, New York. She addressed why these infants were buried at this location and the lives they would have lived in the workhouse. The final presentation of the conference was delivered by Paula Luz Pamintuan-Riva. Unfortunately, Paula couldn’t join us, but she had recorded her presentation for the conference. Paula explored the practice of babywearing and its importance as a physical and visual mechanism for conveying childrearing values and the value assigned to children in Cordillera society. She also addressed how this practice continued despite colonial cultural domination. 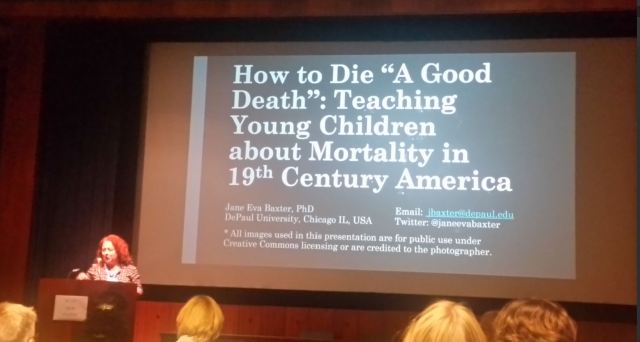 Alongside the podium presentations, the posters at this year’s SSCIP conference addressed a wide variety of topics, including weaning patterns, diet, palaeopathology, life courses, grave architecture, skeletal morphology, and the burial of pregnant women. Karina Grömer also presented a moodboard which visualised children’s clothing in Iron Age and Roman Austria. 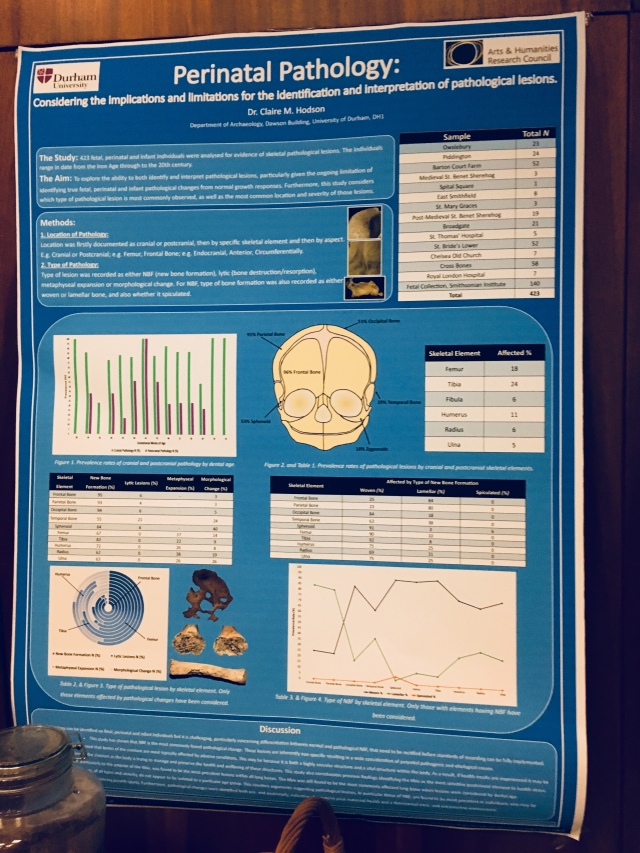 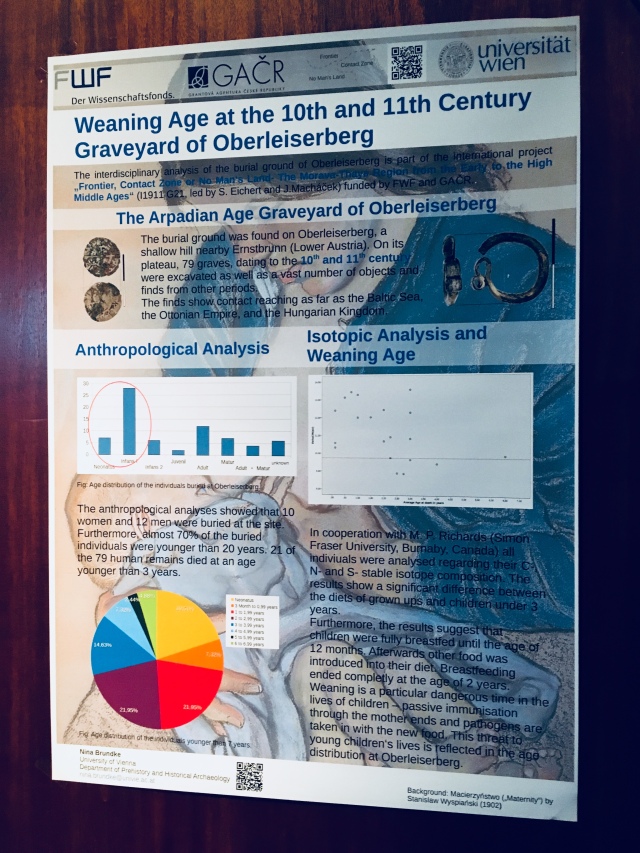 The conference ended with special tours of the prehistoric archaeology and anthropology collections. Delegates had the opportunity to visit the stores of the museum and gained further insight into the museum’s history and its collections. The conference organisers, Katharina Rebay-Salisbury and Doris Pany-Kucera, did a wonderful job of selecting papers that showcased the wide variety of research that is currently being carried out within our discipline 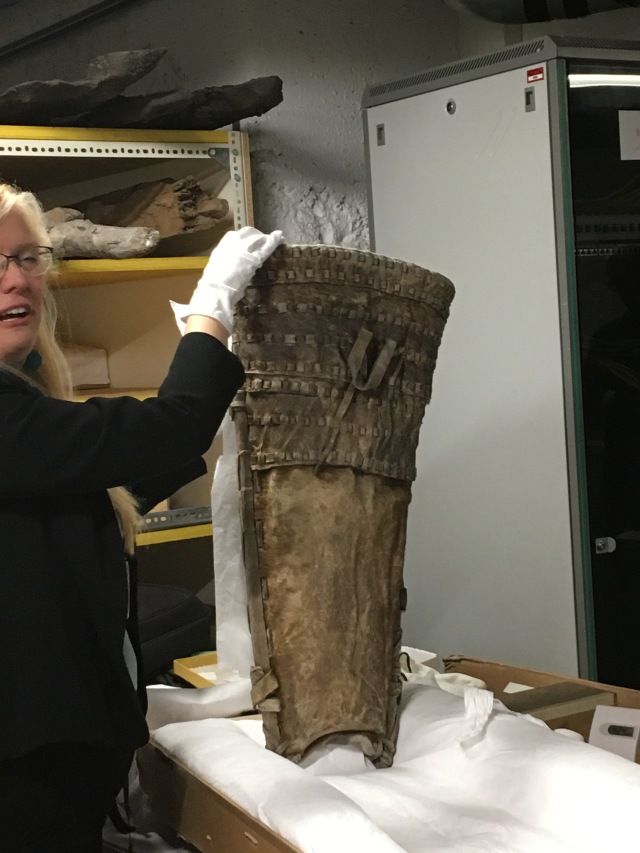 Delegates concluded the conference with tours of the prehistoric archaeology and anthropology collections, both on display and behind the scenes, at the Museum of Natural History (photograph by Kirsty Squires)

The 11th SSCIP conference highlighted that specialists from archaeology, bioarchaeology, anthropology, and history bring valuable skills and knowledge which allow us to further our understanding of children and childhood in the prehistoric and historic past. The use of innovative methods (such as CT scanning and isotope analysis) and collaborative approaches to research bodes well for the future of our discipline. However there are still areas that demand further discussion and attention in the future, such as:

I feel greater acknowledgement of the above points will help move our disciplines forward. This is certainly something to think about for our next annual conference, which will be held in Lincoln (UK).