Posted on September 22, 2017 by sscipcontact 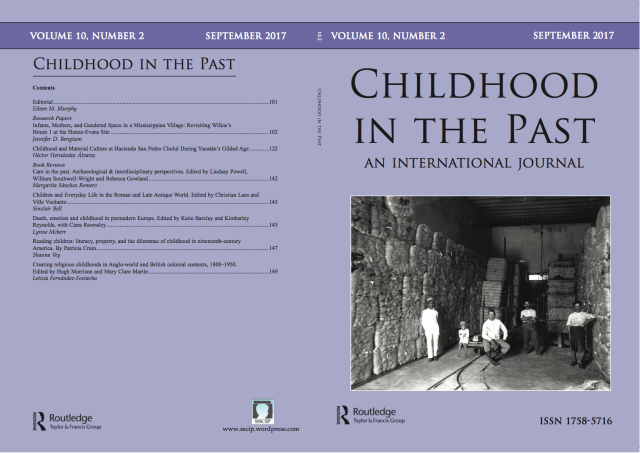 In the first of the research papers Jennifer Bengtson highlights the lack of infant-focused research that has been undertaken in pre-Columbian North America. Her paper deals with the Mississippian cultural tradition and involves an exploration of an unusual structure referred to as ‘House 1’ from the Hunze-Evans village site in Southeast Missouri. Previous interpretations of the structure have identified its special association with women but Bengtson’s work enables a deeper level of interpretation to be gained through the exploration of issues related to womanhood, including fertility, childbirth and infancy. She concludes that the structure represents a unique, local expression of Mississippian cosmological themes related to gender and fertility that were expressed through infant-focused activity, including mortuary ceremonialism, childbirth and associated ritual seclusion.

Héctor Hernández Álvarez’s study focuses on the experience of childhood during the late nineteenth and early twentieth century in the State of Yucatán, Mexico. His study explores the material culture used by children who would have lived at San Pedro Cholul, a hacienda devoted to the cultivation and processing of henequen fibre for export. Yucatán’s Gilded Age (1873–1925) is characterized by an industrial revolution based on the exploitation of henequen and the evidence derived from the site enabled an understanding to be gained about the role of children in these productive processes as well as the nature of child labour at this time. The diversity of artefacts recovered from the site also allowed insights to be gleaned in relation to play, work and child health, while distribution patterns of the material remains demonstrated that children both played and worked inside their house lots. Mechanisms for the socialization of children ensured continuity for the production and reproduction of cultural knowledge that took into account the diverse roles and obligations they had within their families and broader communities.

The journal ends with a collection of book reviews edited by Simon Mays. The reviews cover an eclectic array of books on the topics of care in the past, children and everyday life in the Roman and Late Antique World, emotional responses in the wake of childhood death in premodern Europe, the relation of literacy and property to childhood in nineteenth-century America, and religious childhoods in nineteenth- and twentieth-century Anglo-World and British Colonial contexts. As always, we express our gratitude to all of the contributors and reviewers whose support has enabled our journal to continue to thrive.

Text taken from the Editorial by Eileen M. Murphy.

This entry was posted in Uncategorized. Bookmark the permalink.